The Case for Free Use: Reasons Not to Use a Creative Commons -NC License

When the Creative Commons project published its first licenses in December 2002, it finally brought a sense of unity to the free culture movement. Instead of having to choose from many scattered licenses, creators now have the option to pick the right license for their work using a simple tool. They only have to answer basic questions like: "Allow commercial uses? Allow modifications?"

The tool then recommends one of the licenses developed by the Creative Commons team. They are legally sane, simple documents, specially adapted for various jurisdictions. In short, the Creative Commons project has made life a lot easier for everyone wanting to share content.

One particular licensing option, however, is a growing problem for the free culture community. It is the allow non-commercial use only (-NC) option. The "non-commercial use only" variants of the Creative Commons licenses are non-free, and can in one way make the situation worse than the traditional copyright model: many people can or will make the licensing choice only once. In a collaborative context, license changes can be difficult or even impossible. It is therefore crucial that the choice is an informed one.

The key problems with -NC licenses are as follows:

There may be circumstances where -NC is the only (and therefore best) available option, but that number of circumstances should decrease as the business models around free content evolve. 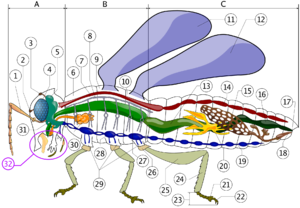 One of over 7,000,000 free photos, illustrations, sounds and videos uploaded to the Wikimedia Commons, the media repository used by Wikipedia and its sister projects. All files on the Commons must be free for commercial use. This drawing of insect anatomy by Piotr Jaworski is licensed under the Creative Commons Attribution/Share-Alike license.

Free content is no longer a fringe movement -- it is something millions of people use every day. Wikipedia, a free content encyclopedia built by volunteers, contains over 15 million entries in more than 270 languages and is among the 10 most visited websites on the planet. Moreover, its growth continues, as does its integration into search engines. Google features Wikipedia definitions in some queries, as well as through the integration of Wikipedia mirror Answers.com in the top right corner of search results. Other search engines, such as Amazon.com's A9, Clusty.com, and Web.de have even integrated Wikipedia directly into their user interfaces.

This success is the result of less than a decade of work. Clearly, free content is here to stay. But, in part to make uses like the above possible, free content sites like Wikipedia explicitly allow and encourage commercial use. As we will see, there are many desirable commercial uses. More importantly, however, if you choose an -NC license, your work will not be compatible with Wikipedia, Wikinews, Wikibooks, and similar free content projects which have more permissive philosophies and practices.

One reason for this is that licenses like Wikipedia's, CC-BY-SA and GNU Free Documentation License, work according to the copyleft (or, in Creative Commons terminology, "share-alike") principle: You can make derivative works, but they have to be licensed under the same terms. You cannot make a derivative work through addition of -NC content, as you can no longer apply the (more liberal) "share-alike" license to the entire work. This is true even for Creative Commons' own licenses: You cannot combine, for example, BY-SA content with BY-NC-SA content ("Otherwise, Share Alike Means Share Alike", as a Creative Commons press release put it).

Even where the license allows it, marking up regions of content as non-commercial and consistently following these boundaries is almost impossible in a collaborative environment. Imagine a website with collaboratively edited text that is partially -NC licensed. As text is copied from one region to another and modifications are made, it is likely that the license will be violated, or that it will have to be applied to more and more text to stay legally safe.

Many free content communities reject -NC licenses simply for philosophical reasons like the ones outlined in this document. For example, the Wikimedia Commons, a media repository operated by Wikipedia's Wikimedia Foundation which contains more than 7,000,000 files, does not allow uploads under restrictive licenses such as the -NC variants. Yet, it is an immensely powerful archive: Any file in the Commons is instantly usable in all Wikimedia projects, in all languages.

The philosophy to allow commercial use is also fundamental in the free software community. While most consumers still use Microsoft Windows as their local operating system, free and open source software is already dominating large segments of the server market, and is increasingly used as a desktop environment by corporations and governments. It is also a key factor in bridging the digital divide and providing computers to the developing world. Accordingly, both the Open Source Definition and the Free Software Definition explicitly state that sale and other commercial uses must be allowed for a license to be considered free.

It is obvious that a Linux company will be unable to make use of works that prohibit commercial use. But non-profit free software communities are equally adamant in rejecting -NC licenses. For example, the Debian Free Software Guidelines explicitly state: "The license of a Debian component may not restrict any party from selling or giving away the software as a component of an aggregate software distribution containing programs from several different sources." Debian GNU/Linux is one of the most popular distributions of the open source Linux operating system.

If you want your work to be recognized and used by the free software community, whether it is itself software or not, it is evidently not a good idea to use an -NC license. But even in the scientific community, liberal licensing is quickly becoming the number one alternative to traditional copyright. The Public Library of Science has chosen to adopt an Open Access Definition for scientific content which permits commercial use, and so have other large open access publishers such as BioMed Central. Scientific knowledge, they reason, ought to be as freely available as possible.

Communities like Wikimedia, Debian, or the scientific Open Access movement do not exist for their own gain -- they provide free knowledge and free software to the world. Putting your own content under a license recognized by these communities will keep it alive, and will encourage people to make active use of it in many different contexts. This does not merely apply to inherently collaborative works; almost any concei